It’s late, again, and hard to concentrate on the task at hand. Not because we’re tired but because we’re bedding down in our hammocks under the full moon and stars tonight, not 75 feet from the edge of Stone Reservoir in the Curlew National Grassland.

It wasn’t easy getting here, but we made a promise to you that we’d make it to Utah today, and we did. Oddly, Curlew National Grassland is in Idaho. Let us explain.

Interstate 80, which by now you are familiar with, really runs the show in the northeast corner of Nevada. On paper, there appear to be other options for conveyance of goods and people, but it’s really I-80 which dictates the flow of things.

Fortunately for us, and for the desk sergeant at the Nevada State Police office in Elko, this hasn’t always been the case. Prior to the Dwight D. Eisenhower National System of Interstate and Defense Highways, there were smaller, paved roads running about between the various towns in this area. But over time these roads were abandoned and then forgotten, except by the locals who may still live near some of the old paths.

So when we departed Wells this morning in search of the one road which would lead us out of Wells and towards Utah, we naturally had reservations about what we’d find but we’re full of hope this was The One. We only needed to travel about 28 miles down the highway, but our route would be 53 miles.

The turnoff for the road was exactly at an off-ramp from the highway and not more than half a mile later we passed a woman standing in the front of her house. It occurred to us that we should stop and ask her about this particular road, which we did, but she indicated it would not be wise to take it to where we wanted to go. We huddled to discuss what she was telling us and agreed it was not the answer we were looking for so we thanked her for her time and continued on into the desert on the dusty dirt road.

A mile or so further we found it necessary to open a barbed-wire gate strung across the road, but a sign said “Please close the gate” so we felt our presence was expected.

The road was serviceable enough but our speed was limited to about 15 mph on average. The road also followed along roughly the same path as a rail line, reminding us of an earlier post regarding two boys and their walk to a rail line for help.

Hands down the road provided us with incredible vistas of wide open ranges and solitude. But it also kept us on our toes. There were sections with enough washboarding that even at very slow speeds the rear wheels of the cars would try to take a different track than the front wheels. Rain water runoff would carve deep canyons along one side of the road before suddenly cutting across the road again, leaving us helpless to avoid hitting the deep ruts with our skinny tires, flexing the car body and jolting the steering wheel from ones hands. We don’t recall the exact number, but there is a finite number of times one can listen to a tire scrape against the underside of its fender before one starts to become concerned. 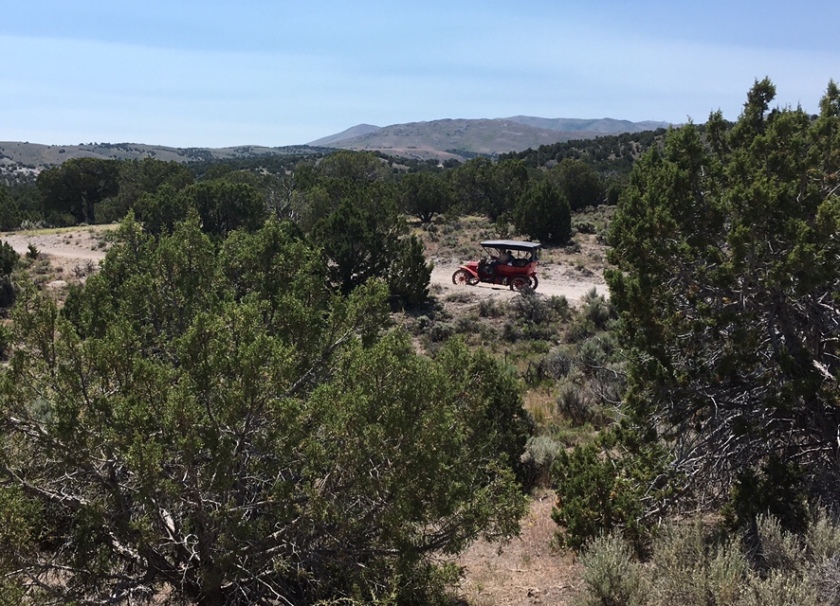 Eventually we found ourselves on an abandoned railroad bed which had been converted to a “road” when the new line was built, and it was certainly exciting to be 10 feet or more above the ground on the raised bed as it curved through several gulches until we came to a point where a gulch had had enough of the crossing and washed it away.

At any rate, it was a wonderful 53 mile drive but it took us longer than expected. So once we were back on the pavement we decided we really had no chance of completing our planned route by nightfall, and decided to proceed as far as we could while still being able to find lodging. That took us to Snowville, UT for gas and food, and another 8 miles north into Idaho.

4 thoughts on “A Plan Is Something You Staple Changes To”

Start from the beginning